Stavros Theodorakis at the Italian RAI: It is positive that a deal was reached, albeit at the last moment. I hope that the “drachma gang” will now shut up

“Alexis Tsipras is responsible for the chaos of the last six months, but, at the same time, he is the man who made a courageous turn the last ten days,” pointed out Stavros Theodorakis, in an interview with Elisabetta Casalotti, at the Italian RAI. Theodorakis expressed the hope that “the Prime Minister will hold on to this turn, and that he will do it with his heart in it, because only that way we will see results".

The leader of Potami also reiterated that “for the good of the country, it was necessary to reach an agreement, even so late. I hope that the drachma gang will now shut up. The deal that Alexis Tsipras concluded with our European partners was the end of illusions. The illusion held by some that a country can make it on its own, without having solved its problems.

Asked to comment on the role that Potami will assume in the forthcoming political developments, Stavros Theodorakis stated “We will not join the government. But, we will not become the opposition that throws rocks. We will be a constructive opposition”. On the scenario of snap elections, he clarified that Potami is ready, while pointing out “we’d better not have snap elections. We must resolve our major problems first and then have elections, when the risk of a Grexit will be gone”.

Επόμενο Stavros Theodorakis, in the Dutch newspaper NRC Handelsblad: It is hard to implement reforms, when you have always been against reforms 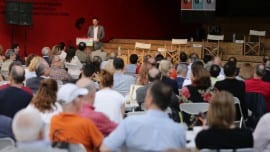